Here’s an example of using my Python package PyBATS for sales forecasting. You can see the full example on the PyBATS website here.

In this example we will model a simulated dataset of daily item sales. Because the sales are integer valued, we’ll use a Poisson DGLM:

Where is the state vector, is the Poisson mean, and is called the linear predictor.

We’re going to define a dynamic model with the following components in the state vector:

Load in the data

The PyBATS analysis function provides an easy wrapper that will:

We know what terms we want in our model, and we’ll need to define them using the analysis function. When we pass in the covariates (Price and Promotion) and list of holidays, those terms are automatically added to the model. We will manually say that we want a seasonal component with a period of 7. An intercept (1 trend term) is the default, so we don’t need to pass in any arguments for that.

We also have to set a few parameters that specify what dates we want to forecast, what forecast horizon we’re considering, and how many data points to use for setting a prior.

We specified the desired output with the argument ‘ret’, for return. The outputs are:

Let’s start by looking at the 1-step ahead forecasts over the full forecasting period: 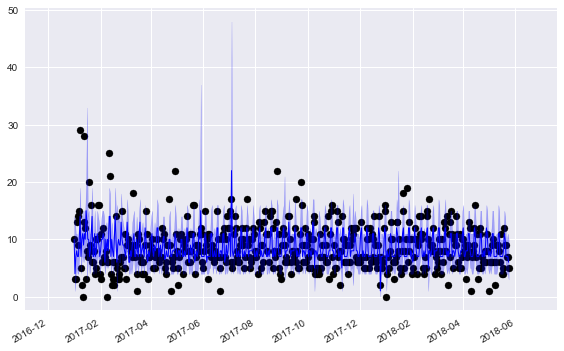 We’re plotting the median forecasts along with the 75% credible intervals. One very clear pattern is the weekly effect, with a weekly spike in our forecasts. There’s also a very noticable holiday effect - sales are unpredictable on holidays, and our credible intervals become very large.

You’re probably wondering: How accurate are those point forecasts?

The second number is the Zero-Adjusted Absolute Percent Error (ZAPE). This is equivalent to the Mean Absolute Percent Error (MAPE), but is still defined even when the sales are 0. On days when sales are 0, then the ZAPE loss is equal to the forecast. Interpreting this as a percent error metric, we’re off by a significant margin - but not bad for noisy sales data either! The median is not the optimal forecast to minimize ZAPE, but it’s a simple and easy point forecast to obtain.

Okay, now let’s zoom in to just the final 60 days of forecasting, to a more detailed picture of our online, sequential forecasts: 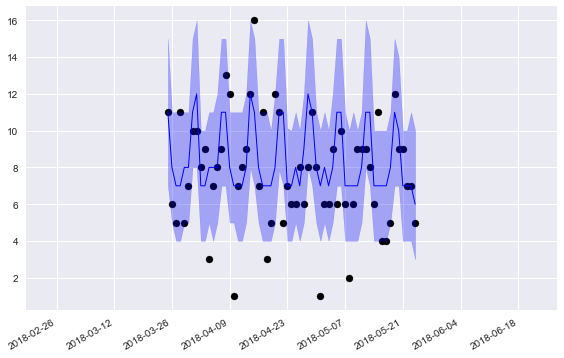 These forecasts look pretty good! Our 75% credible intervals capture the true sales most of the time, as it should. The weekly pattern is much more clearly visible here.

What if we want to monitor the day-of-week effects? It looks like they’re changing over time - what days are becoming more or less popular? Well, that’s why we saved the model coefficients, so we can answer exactly that question!

We start by taking the posterior coefficents and only looking at the 6 seasonal coefficients, using the ‘mod.iseas’ property to get the indices for the seasonal components.

Then, we transform these harmonic seasonal components into interpretable coefficients for the 7 days of the week. For more details on this process, look at Bayesian Forecasting and Dynamic Models by Harrison and West, Chapter 8.

Next, we’ll align these 7 components with the days of the week, and plot the posterior mean of the coefficients over time. Unfortunately, the structure of the seasonal components means that even after the transformation, the days are rotated. The ‘current’ day will always appear first in each row in the matrix, so we’re going to pluck only that day. 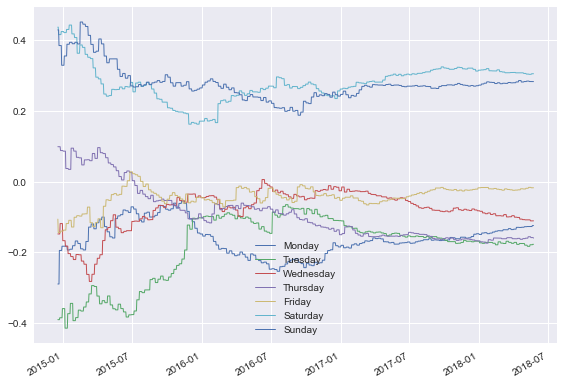 Okay, now this is interesting! We have a few clear takeaways:

These effects in the state space are additive on the log scale. Remember the Poisson DGLM has a log-link function:

If we want to interpret these effects in terms of actual sales, we need to recognize that they are additive and on the log scale in the state space. In terms of the prior mean, the effect is multiplicative. First, we can decompose the linear predictor into seasonal and other terms:

The regression vector F_seas is just a 0-1 indicator to pluck out the correct day’s seasonal effect. So to interpret each day’s multiplicative effect on sales, we take the exponent of the graph above: 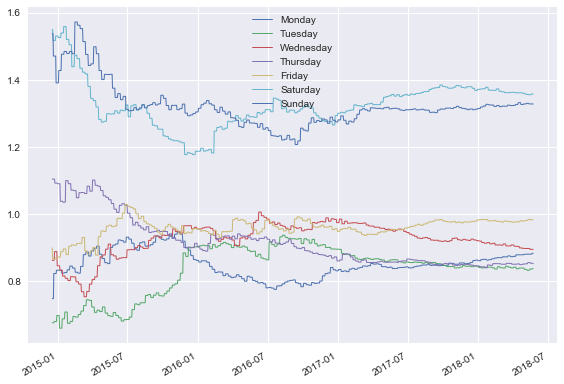 Perfect, this is very clear! A multiplicative seasonal effect of 1 has no effect on Sales. Anything larger than 1 boosts sales, and smaller than 1 reduces them. Looking at the end of the time period, we can say:

The long term trends look fairly stable, which is natural - shopping habits change slowly over time. Part of that also comes from our model definition. The discount factor on the seasonality component is very close to 1, so we discount historical information slowly. If we believed that these day-of-week effects changed more rapidly over time, we could re-run the analysis with a lower discount factor, using the parameter delseas as an argument to the analysis function.

In this example we’ve used the PyBATS package to complete an analysis of simulated sales data. We:

There’s plenty more that we could have explored here as well: